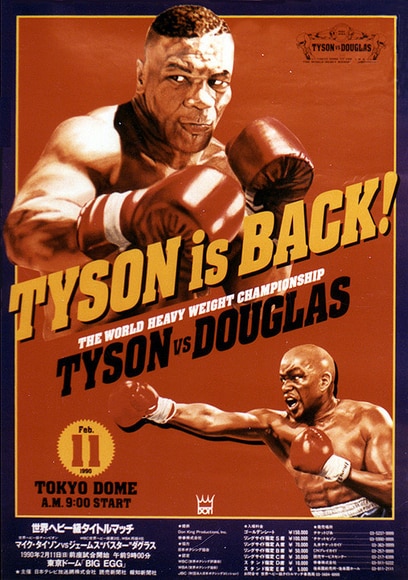 Life is stressful. It moves fast. We all want more hours in the day.

The stress of work, family and life in general wears on all of us. The last thing we want to think about is spending an hour in the gym after a stressful day. It’s so easy to just stop by the drive-thru get some tacos or a cheeseburger and watch tv until bedtime and start over the next day.

I’m going to share a famous boxing story about motivation, stress and adversity. It was February 11,1990. My hero in the boxing ring at the time was Undisputed Undefeated Heavyweight Champion “Iron” Mike Tyson. He was a  young heavyweight that not only beat but destroyed in one or two rounds every top rated heavyweight boxer in the division. This was long before he became the circus act train wreck that he is famous for today.

Tyson was pure perfection in the ring. The way he moved, the way he punched. He beat everyone like they stole something from him. “Iron” Mike was the most feared man on the planet. He was at his peak and already a multimillionaire at 23 years old. The biggest talk in sports at that time was an upcoming bout between another young undefeated heavyweight named Evander Holyfield which was going to bring both boxers the biggest payday in boxing history.

While the world was waiting for that mega-fight Mike Tyson went to Tokyo for a tune-up fight against a journeyman from Ohio named James “Buster” Douglas. In 1990 everybody knew Mike Tyson but hardly anyone knew his opponent. The Mirage, which was the only casino to put odds on the fight, had Douglas a 42 to 1 underdog.

You want to talk about stress…

We have all experienced dark periods in our lives. However let’s take a look at what was going on at that time in the life of Buster Douglas.

His father refused to train him again after he lost his last title fight in 1987.

In the summer of 1989 his wife left him without any explanation.

He dealt with his depression from the separation by drinking heavily and ended up with a DWI that fall.

He quit drinking and got back in the gym to train for the biggest fight of his career against the most feared man in the world. It was no secret to anyone in boxing that he was just a “tune up” for Mike Tyson. No one gave him a chance to make it out of the first round.

The only person who believed Douglas had a chance against Tyson at the time was his mother Lula Pearl. She bragged to everyone who would listen that her son was going to beat Tyson and be the Heavyweight Champion of the World. He tried to get her to stop bragging but she would not hear it. She made him promise her that he was going to beat Tyson.

23 days before the fight, Lula Pearl died of a stroke.

He went to Tokyo, Japan far away from anyone he knew. He didn’t have his father in his corner. He no longer had a wife. His mother, the only person who believed in him, had just passed away.

That night James “Buster” Douglas walked into that ring totally alone to face a man that everyone in the world except for his recently deceased mother believed was going to knock him out in the first round.

When the bell rang for the first round the world saw a man on a mission. Douglas was not afraid of Tyson like everyone else had been. He was doing what the whole world thought was impossible. He was doing something that only he and Lula Pearl believed could be done. He was beating “Iron” Mike Tyson.

In the eight round Douglas slowed down for a brief second and was hit with a devastating uppercut that sent him to the canvas flat on his back. The announcer said  “Douglas got a little overconfident.” They were doubting that Douglas would be up before the count of ten. “Buster” Douglas got up at the count of nine. His legs wobbled and his eyes were glassy. He was barely conscious but survived the round.

Douglas later said that when he went back to the corner after being knocked down that he thought to himself “I took your best shot and I am still here.”

I will never forget watching Tyson, my hero, on his knees trying to find his mouthpiece with a blank look in his glassy eyes. Tyson did not beat the ten count. The whole world was now in shock. That is with the exception of one man.

James “Buster” Douglas. The new Heavyweight Champion of the World.

So how did he do it? What drove “Buster” Douglas to achieve the impossible?

No. Douglas got paid the same amount if he won or lost.

Was it because he wanted to be a great Heavyweight Boxing Champion.

No. He lost his first title defense and never won a major fight ever again.

There was only one thing that motivated James “Buster” Douglas the night of February 11, 1990 in Tokyo, Japan.

His motivation came from something far bigger than money, fame, boxing or even himself.

James “Buster” Douglas had a why.

That why was the promise he made to his mother. The promise that he was going to be the strong resilient man that she had raised him to be.

His why pushed him to overcome all the doubts, all the fears and  the entire world believing that he was just another first round knock out victim for “Iron” Mike Tyson.

Why do you go to the gym and workout?

Is it because you want to lose some fat and build some lean muscle?

Those whys are only the results of your hard work, not the purpose.

If you want to find the motivation to overcome the obstacles, the stress and all the people who don’t believe you can reach your goals you have to find your real why.

Your why has to be that you want to feel better about yourself.

Your why has to be that you want the confidence that can only be obtained by doing the work and making the sacrifices necessary to reach your goals.

Your why has to be that you want to have more energy to do the things you love with the people who you love.

Your why has to be that you refuse to be one of the millions of people who suffer from high blood pressure, diabetes and other major health problems that end their life early as a result of poor diet and lack of exercise.

Your why has to be that you refuse to be a hopeless victim of your circumstances.

Your why has to be the realization that you and you alone have control of your future.

Your why has to be that you want to be the best you that you can possibly be.

Your why has to be that you desire to be the best son or daughter that your parents raised, the best husband or wife that your spouse married the best parent that your children look up to.

Fitness isn’t about looking good in a swimsuit or a tank top or having six-pack abs.

That why is not enough to get you over the obstacles and roadblocks that life is going to throw at you.

You won’t find that why watching tv on your couch or feeling sad looking at old pictures of yourself ten pounds lighter.

You can only find that why by pushing yourself and leaving the comfort of complacency and self-pity.

If you have a why share it with the world in the comment box below. Maybe you can inspire someone else to find their why.

If you haven’t found your why start looking right now.

Find your why and shock the world just like “Buster” Douglas did on February 11,1990.

Thank you for reading.

PrevPreviousWhy I Love Annihilation
NextAre You Eating Like A Sumo Wrestler?Next