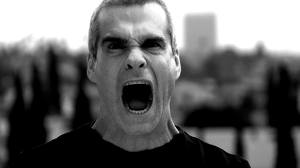 Writing my first fitness book Annihilation: Total Body Training System was a much bigger job than I anticipated. It took me and several other awesome people on my team over a year to complete.

The book was a labor of love. The editing was even more challenging. After firing my first editor I had the great fortune of finding a wonderful editor Kisha. We exchanged many emails and hours of phone calls before we were confident enough to release the final product. It was a stressful obstacle filled journey but the end result was worth it.

Last year I accepted an invitation from my awesome editor Kisha to come spend a couple of days in L.A. (Los Angeles not lower Arkansas) to celebrate the launch of Annihilation:Total Body Training System

When I found out that Henry Rollins was going to be in Beverly Hills that same weekend…the deal was sealed. I scheduled people to cover my training sessions and booked the hotel…I was getting on a plane.

I was staying in downtown Long Beach but the show was in Beverly Hills.

I was going to get the whole L.A. experience on my way to see Mr. Rollins.

The distance to the venue was about an hour train ride and 30 minute cab ride. Los Angeles never ends, the city is huge.

Then the train took us through Compton…the only knowledge I had of this city was from Eazy E, N.W.A. and Boys In The Hood.

I saw the Staples Center in Inglewood and finally Beverly Hills…

A rare actual pic of me

No Crips and Bloods turf wars in Compton…

Beverly Hills was just some streets and stores…nothing magical like it looks on television.

The theater Henry Rollins was performing in was small. It reminded me of my old high school theater…

I was in row six and could see Henry’s sweat beads on his forehead…WINNING!

Henry Rollins talked about his meager beginnings and what it took to overcome where he started. How he went from making minimum wage managing an ice cream shop to lead singer of Black Flag to author to actor…it hit a chord with me and my journey to overcome my small and adversity filled beginnings. I love his message, no matter what career or dream you choose, what it takes to make it happen and to compete with people who come from more fortunate beginnings.

The show was everything I expected and more…I walked out of that theater ready to knock down skyscrapers and invade a small country.

After a wonderful weekend I got on the Metro and headed to LAX to fly home. It was a long ride through Compton and a 30 minute wait in Watts. I got my notebook out and I wrote down some of the things I noticed.

Every where you looked homes, businesses and playgrounds were all surrounded by tall fences with barb wire.

Every window had a security grill and every door had iron bars.

It looked like a prison with people and children walking around.

It made me think…

Is all that barbwire there to keep people out?

Or does it keep people in?

I grew up in the projects so I was no stranger to crime and violence and poverty. I experienced all of them.

It was no traumatic experience as educated Midwestern theorists would have you believe.

It was just our environment…we were unaware that any other options existed. The fences and barb wire succeeded.

It was when I left that environment that I felt fear and insecurity.

When I began my first real job as a trainer I was in charge of the 5am bootcamps for all these suit and tie guys who worked for Texas Instruments and IBM. Here was this 18 year old kid from the projects ordering around a bunch of 30 and 40 year old executives in a parking lot every morning.

I was terrified at first…I thought to myself all of these educated high income people would never pay me for my advice and guidance.

A teenager from the projects, I was the polar opposite of them. I was always in an extreme state of hyper vigilance. I was always guarded and prepared if someone should try to question me and my abilities. My workouts and my training style wasn’t coming from a position of confidence and assurance…it was coming from fear and insecurity.

The fear that all of my clients didn’t believe I was capable…That I was in over my head.

The insecurity of believing I didn’t belong there and the first small error I made  I would be terminated.

It was not them that believed I didn’t belong there.

I was the one who believed all of those things.

It kept me a prisoner…afraid to give up the world I knew so that I could have the world that I deserved.

I made the common mistake of believing that my success and accomplishment in life, or the lack of it was determined by where I began.

The realization that the only thing keeping me from having everything I had dreamed of was the fence and the barbwire changed my life.

That barb wire that I believed was there to protect me actually was robbing me of my chance to shine.

Ever since then I have become educated, experienced and fiercely dedicated.

Now I am dedicated to helping as many people as I can realize that those fences aren’t real.

Next time you walk into the gym, new job, new school or new city and you have the fear of what others are thinking or believing about you…

It isn’t the rich kids that had everything handed to them holding you back.

It isn’t the person with the degree who has never done a day of labor in his life that is making your life hard.

It isn’t your parents, the government or the city or neighborhood you live in.

It is your own fear and insecurity that comes from daring to  reach beyond your comfort zone and station in life.

While you may hate the fences and barbwire, when it is all that you know it is easy to relax and accept.

It takes courage to climb that fence and risk getting cut and tangled in that fence only to end up in a world that you feel you don’t belong.

If you start from the bottom just work longer and harder,

make certain that though others may have started with more than you.

They may have been born with more money, more talent, more opportunity…

Never let them outwork you or out learn you.

Never let them hold you back.

Not in the gym, not in the workplace or not ever in life.

Climb that fence…and never look back.